The Ultimate Backpack for Guys: The Matador Seg30 Review 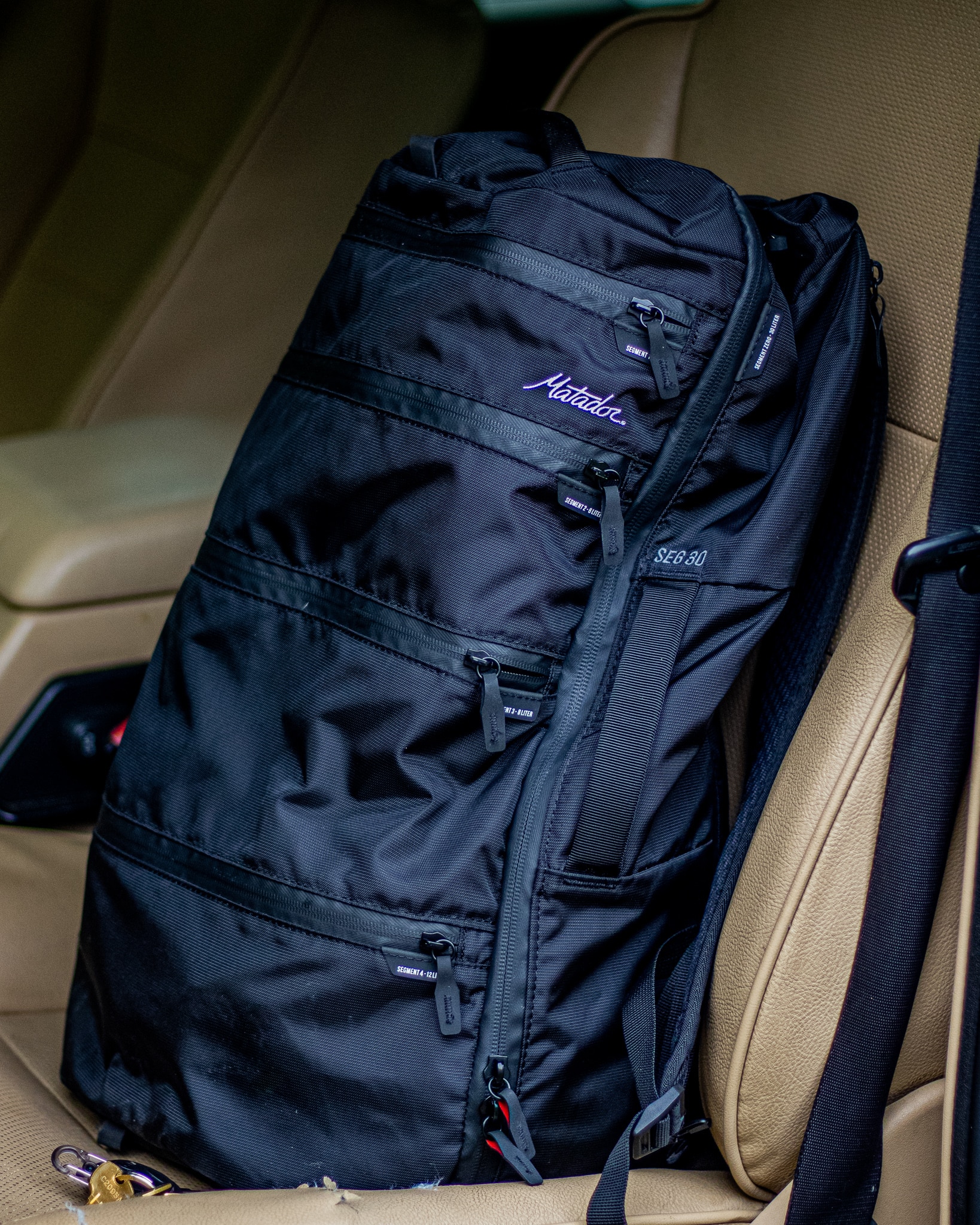 I’ll be honest with you guys: I don’t love backpacks. Maybe it’s my naturally skeptical personality, but anytime I see a guy with a backpack at large, I wonder what the hell he’s got going on in there. But I do recognize that there are times when a backpack is unbeatable, and I’ve actually found what I believe to be the ultimate backpack: The Matador Seg30.

Again, in the name of honesty, I’ll tell you that a rep from Matador sent me the Seg30 for free, and I don’t have to send it back. But I got it before it was released to the public, so I’ve had it for close to a year now. It sees use as a travel pack, a camera bag (which is its most common use, at least in my case), and just a simple all-purpose bag. And, I’ll admit, I’m impressed.

And here’s the thing: While I do have an affiliate program with Matador, they are not paying me for the review. I signed up for the affiliate program long after they sent me the bag, as I wanted to be sure it was something I could recommend. Guess what? I can recommend it.

Note: TGA is an Amazon affiliate, as well as an affiliate of Matador. If you purchase something through one of the links in this article, The Graying Area may make a commission.

What is the Matador Seg30, and what makes it the ultimate backpack?

Have you heard of packing cubes? Of course, you have. They’re modular cubes that keep your stuff organized while traveling. Well, Matador saw the draw of this modular packing system and started producing backpacks with built-in segmented systems. They began with much larger models, but they’ve most recently released the Matador Seg30.

The Matador Seg30 is a 30-liter backpack made from 420D ripstop nylon, making it strong yet lightweight. That nylon also features a UTS waterproofing treatment to protect your gear inside. It features four segmented compartments: 4, 6, 8, and 12-liters in size, respectively. There is also a large main compartment that measures 30 full liters in volume, accessed from the large clamshell-style double zipper.

Beyond the segmented pockets, the Matador Seg30 also has a small top pocket for valuables, a side-access waterproof water bottle pocket, and a zipper laptop pocket. There are handles on the top, bottom, and side, as well as on the interior of the bag when unzipped in the clamshell position.

The Matador Seg30 features lightly padded shoulder straps with a sternum strap and several loops throughout the back to use as tie-downs or for clipping carabiners.

You already know that I don’t love backpacks, but I do love the Matador Seg30. There are a bunch of things I dig about it.

I really like the segmented pockets. I can keep all of my gear separate, and the 8 and 12-liter pockets are large enough to handle my padded camera case insert (available on Amazon), which is what I mainly use the bag for now. I can keep my lunch in one segment, spare clothes in another, and camera in another. More oversized items, such as boots, stow nicely in the large clamshell pocket. It’s organization at its best!

I also really like that the bag isn’t going to let a bit of rain ruin my gear or my clothes. It’s been on hiking treks in light rain, and my stuff was totally dry. My camera, my clothes, and even my snacks.

I really like that the bag is lightweight. I don’t mind carrying a heavy load on my shoulders, but I don’t want the bag itself to contribute much. The ripstop material is tough but still lightweight, and that’s a significant plus for me.

It’s good-looking. Most backpacks these days are ugly as hell or feminine. The Matador Seg30 is rugged without looking like it belongs hanging from a climbing rope on a 5.10 and masculine enough without offending anyone’s very sensitive sensitivities (I’m kidding.. Don’t be so sensitive..).

The bag has no actual structure, which many see as a downside, but I’ll argue otherwise. Under normal circumstances, my family and I travel quite a bit, and we try to keep our baggage limited to as few items as possible. The less we have to keep track of in an airport, the better. Well, the Seg30’s lack of structure makes rolling it up and stashing in a suitcase a breeze. And, since we always seem to come back with more bags than we left with, having a durable trustworthy bag with us on a trip is now a must. Thank you, Matador.

What I’d improve about the Matador Seg30

Don’t get me wrong. The Matador Seg30’s not perfect. There are a few things I would change:

Even with these few areas that could use improvement, it’s still the ultimate backpack for my needs.

Overall, the Seg30’s an excellent backpack with great looks and functionality. Isn’t that all you need from a backpack? I’m using mine mostly for photography gear, and it works well for my needs. I also added a few small extras, like the Nite Ize Doohickey (available on Amazon), a Black Diamond carabiner (available on Amazon), a kit for first aid, and a Leatherman MUT (available on Amazon) for a bit of insurance on a hike or anytime I’m away from the truck. Otherwise, it’s the ultimate backpack for me.