Are Seiko Watches Good? A Guide to the Affordable Watch Brand 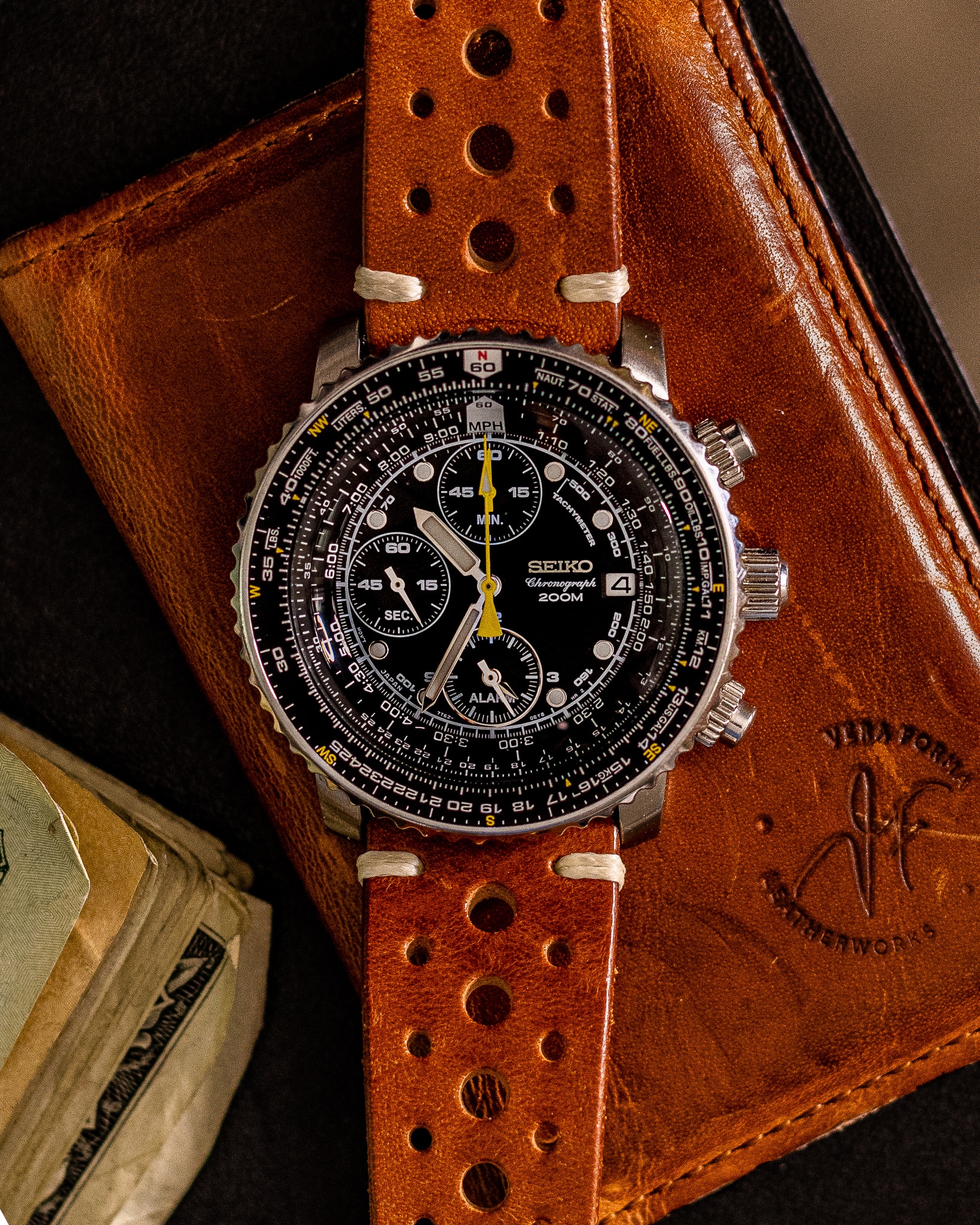 If you’re new to the watch collecting hobby, you’re probably feeling overwhelmed by the amount of information on the internet. My name alone is attached to at least 30 articles on the topic. But one brand that continues to appear is Seiko, and new collectors often wonder, are Seiko watches good?

The style and price are probably appealing, at least when compared to far more expensive brands like Rolex, Omega, Patek Philipe, and the like. But even entry-level watches might be more costly than the average guy expected to spend. So, with a rather significant initial investment on the line, it makes sense that a guy would want to know if Seiko watches are any good. Allow me to clear it up.

This article does contain some links to Amazon products. As an Amazon Associate, The Graying Area will make a little bit of cash if you buy anything using our links. Just FYI.. And, buy a lot.

Before we dive into the watches (watch guy pun), let’s take a quick look at Seiko’s company history.

Seiko’s story starts as far back as 1881, when the company’s founder, Kintaro Hattori, opened a watch and jewelry shop in Tokyo, Japan. Mr. Hattori began importing Swiss watches, and his shop grew in popularity very quickly. By the late 1890s, Hattori took a role as a director of the Tokyo Clockmaker and Watchmaker Association and the Chamber of Commerce.

By 1892, Hattori began producing clocks under the name “Seikosha,” which he later shortened to Seiko, the Japanese word for “exquisite.” The company continued to grow over the 70 to 80 years.

By the late 1960s, Seiko produced the Astron, which was the first production watch with a quartz-powered movement. Some consider this the beginning of the quartz crisis, which swallowed many mechanical watch manufacturers whole and allowed the industrious Japanese market to thrive. The year 1965 also saw the release of the first Japanese dive watch, designed for use by the 8th Japanese Antarctic Research Expedition (talk about a badass skill, eh?).

That’s enough on the company story, but it serves to explain its long and rich history.

Is Seiko a Good Brand of Watch? Quality, Price Point, and Styling

There are quite a number of factors that determine whether or not a watch company can be considered “good.” Their build quality, pricing, and styling are all important considerations. Without nailing all three of those areas, it’s just another watch company. Let’s see how Seiko does in each.

Truth be told, Seiko’s build quality is usually spot on. There are issues with misaligned chapter rings on some of their divers, but generally speaking, Seiko watches are long-lasting, durable, and well-put-together.

Like the majority of entry-level watches, Seiko relies heavily on stainless steel. This is not a bad thing, though. Stainless steel cases are durable, and they rarely tarnish. They might scratch easily, but that’s true of all stainless steel watches.

Seiko’s watch movements are usually pretty bomb-proof. The company’s quartz-powered movements are dialed-in and robust, and the automatic movements are true workhorses. They might not be pretty to look at (they aren’t), but they’re high-quality.

Most of Seiko’s watches are under $500, which is a really tough and competitive market. But that’s excellent news for the new watch collector, as it makes curating a flexible collection of watches for any occasion approachable.

And, it also makes some of the minor issues, such as lower quality bracelets and misaligned chapter rings, easier to overlook.

I’ll be very frank: most of the watches that Seiko markets to the US are ugly as hell. I’m not sure what it is, but they’re loud, ugly, and too busy. There’s a line known as “Coutura,” and it’s god-awful.

But, Seiko’s other watches are outstanding. The company’s divers, pilot’s watches, and even some dress watches are iconic. And they owe a lot of that recognition to their styling. They’re rugged, functional, and easily recognizable—everything you’d want from an icon.

Now, let’s cut to the chase. I’ve rounded up some of the best models for you to check out and add to your collection. Truth be told, if these were the only watches in your collection, you’d be doing quite well. There’s something for every situation here, whether you’re freediving to the bottom of the ocean or just taking your dog for a walk.

The Seiko Flightmaster is one of my favorite watches of all time. It’s a quartz-powered chronograph in a stainless steel case, and it’s clearly a design that pilots would love. Factor in that it has a screw-down crown and pushers which provide up to 200 meters of water resistance, and the thing could double as a diver, if needed. Check out the Flightmaster here on Amazon.

Seiko’s known for its affordable divers, and the Turtle is one of the most beloved. Again, it’s a stainless steel case with 200 meters of water resistance, but this time it features an automatic movement. And, it’s another watch that’s well-respected within the watch collecting community. Check out the Turtle here on Amazon.

The SKX is the quintessential Seiko diver, but the problem is that Seiko no longer makes it. You can find used models on eBay, and there are occasions where severely overpriced options do show up on Amazon. However, Seiko now makes the “5KX,” which is very similar except it comes in a wide variety of colors and styles, doesn’t feature a screw-down crown (which gives it 100 meters of water resistance), and has an improved automatic movement. Check out the 5KX here on Amazon.

Another pilot-style chronograph, but who can deny the good looks? The SNN241 is a quartz-powered stainless steel chronograph, and it comes with a low-quality leather strap. But, with a strap upgrade, this seriously affordable piece becomes a real show-stopper. Plus, the lume on the hands and markers is incredible at night. Check out the SNN241 here on Amazon.

The SNK393 doesn’t get enough play, and I genuinely love this watch. In fact, I look at it as a Rolex Explorer understudy. I love the classic look, the robust movement, and the relatively modest size. The bracelet sucks, though, so plan early on for an upgrade. And, if you choose wisely, you could actually dress this watch up with the right strap, allowing it to pull double-duty in your collection. Check out the SNK393 on Amazon.

So, the question remains: Are Seiko watches good? In my opinion, the answer is most definitely yes. These watches are durable, stylish, and affordable, which checks off almost all new collectors’ lists of needs. They’re also well-respected within the watch community, as almost every watch guy owned an SKX at one point.

Let me know what you think in the comments below. Do you like Seiko watches? Do you have a Seiko disaster story? Is there another affordable Japanese watchmaker that you prefer? I want to hear from you.

Is Seiko a luxury brand?

No, Seiko’s an entry-level, affordable watchmaker. There are some models that strike luxury-level price points, but they’re limited editions with rare materials. On the other hand, Grand Seiko is a luxury brand, but they’re two very different brands under the same umbrella.

Are Seiko watches worth buying?

As long as they aren’t the models hanging out in a department store jewelry case, Seiko watches are typically worth buying. The classics include the Flightmaster, the SKX, the Turtle, and the Seiko 5 field watch, and they’re all very much worth the money.

Are Seiko as good as Rolex?

Fundamentally, no. Rolex is a far superior brand to Seiko’s basic models. But, Rolex watches typically cost 10 to 20 times more than the higher-end Seiko offerings, so comparing the two isn’t exactly fair. That said, Rolex has had its fair share of quality control issues, as well.

Why are Seiko watches so cheap?

Seiko has been making affordable watches for a very long time, and the company works in a very efficient and dialed manner. This allows the brand to manufacture watches cheaply without sacrificing quality.