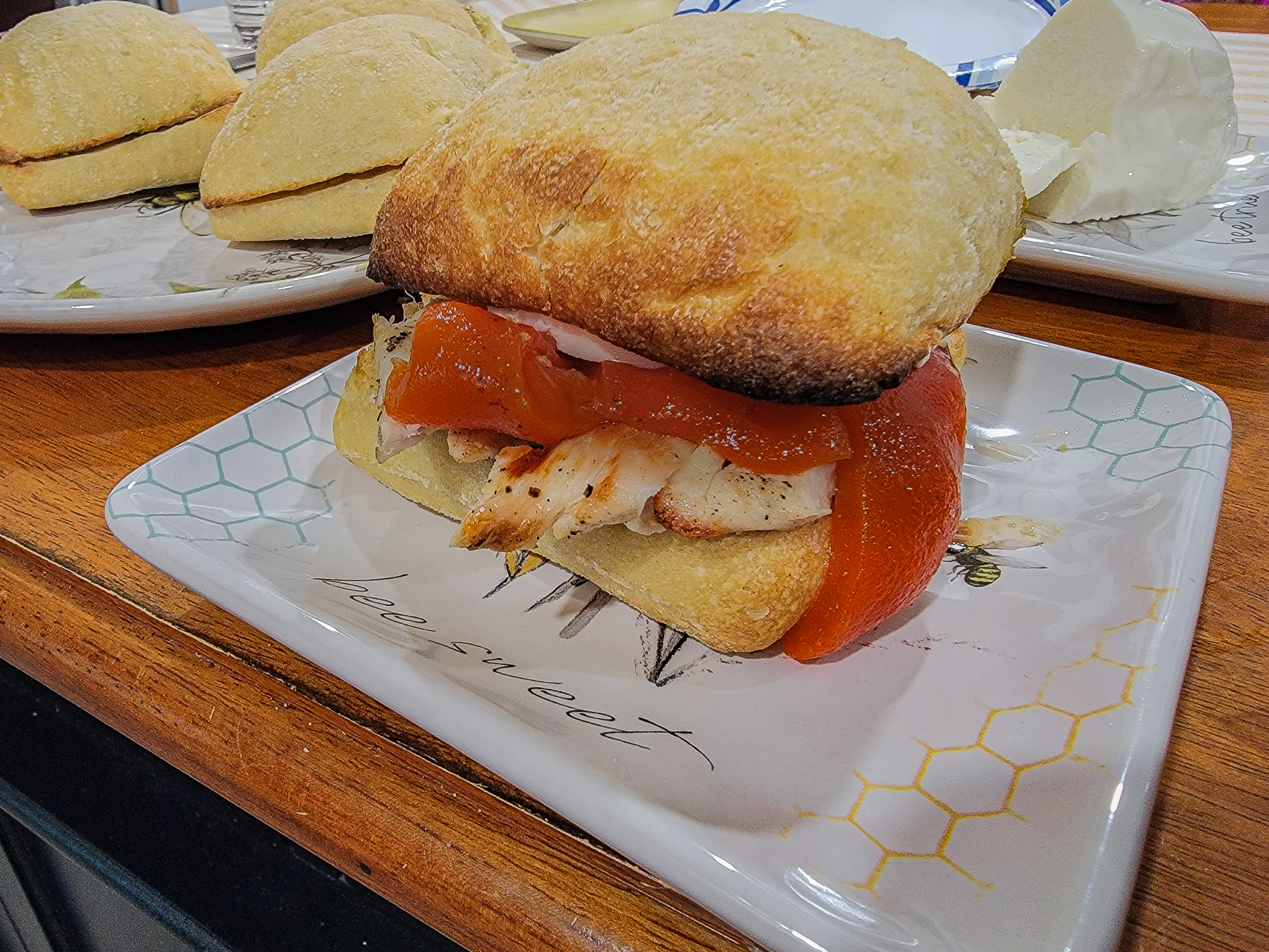 A long time ago, I worked at a hospital in a really high-end area of New York. In that hospital were two top-tier sandwich shops under the same name, and they had the best chicken ciabatta sandwich with roasted red peppers, mozzarella, and pesto. I ate it like three times a week, which was a problem because it cost more than my hourly rate at that time. So I came up with my own kickass, easy chicken ciabatta sandwich recipe, and I’ve been enjoying it ever since.

This chicken ciabatta sandwich is so easy that you’ll have no problem impressing your wife, girlfriend, date, or whoever else you choose to spend your time with. It takes like half an hour to make, including the time it takes to grill the chicken. And, since cooking is such a great hobby, it’s an enjoyable way to spend a few minutes.

Here are the basics of what you’ll need:

How to make the easiest chicken ciabatta sandwich

Guys, as long as you know how to grill a piece of chicken, you got this.

Step 1: Prepare the chicken, ciabatta, and the grill

Place the butter in a microwave-safe bowl and warm it until just melted. This is usually just 20 seconds or so. Once melted, mix the garlic into the butter and let sit for a few minutes. This is enough garlic butter for four rolls, so you might need more if you’re making more sandwiches.

While the garlic and butter are making friends, slice open your ciabatta rolls. When you’re done slicing them open, spread the butter and garlic on both cut sides of each roll.

Prepare the chicken by separating the cutlets and drying them with paper towels. This is an important step that some guys might not think about when preparing meat, but it ensures the seasoning sticks. Once patted dry, sprinkle each piece of chicken with salt and pepper, front and back, according to your taste.

Preheat your grill to medium-high heat. Once it’s all warmed up, slap those pieces of chicken on the grates and let ‘em go. I’m not going to tell you how to grill chicken breast, but there are plenty of recipes and how-tos worth checking out.

Also, place your ciabatta rolls cut-side-down on the rack in your grill. If you’re cooking over charcoal, pick the coolest area and pay close attention so they don’t burn. The rolls will finish faster, so it’s okay to wait a few minutes to throw them on.

When they’re done, turn off your grill, collect that goodness and take it inside.

Flip those delicious ciabatta rolls on their backs like turtles and spread that good green pesto all over. You don’t want it on there too thick, but you definitely want to cover the entire surface. Trust me, that pesto matters, and you want it in every bite.

When you’re done spreading the pesto, it’s time to slice up those delicious roasted red peppers. Sometimes, getting them out of the jar is a bit of a pain in the ass, but they’re worth it. I like slicing them in 1-inch strips, but it doesn’t really matter.

If you didn’t buy pre-sliced mozzarella, slice it into pieces ¼ inch-thick.

Now that you’ve spread the pesto and sliced the peppers, the chicken should be cool enough to cut up. It’s best to cut the chicken across the grain for easier chomping.

Remember when Cap finally got to say that? Man, what a build-up.

Now it’s time to throw this masterpiece together. Place the bottom half of the ciabatta roll (yes, there’s a bottom half, don’t kid yourself) on the plate, and lay some strips of chicken across it. Next, lay your desired amount of roasted red pepper strips over the top of the chicken. Finally, take two or three pieces of fresh mozzarella and throw them on top before capping it off with the top of the roll.

If you like balsamic vinegar, don’t miss the opportunity to drizzle some across that awesome mozzarella before topping the sandwich off.

This is a killer sandwich packed with tons of delicious flavors. Between the pesto, garlic, peppers, and vinegar, it’s just unbeatable. And it really doesn’t take that long, so there will be plenty of time for activities.

Preparing an awesome chicken sandwich is a badass skill. Here are some of the most frequently asked questions about these slamming sandwiches.

Is a chicken sandwich healthy?

That depends. If you’re comparing this sandwich to a cheeseburger or a fried chicken meal, it’s way healthier. If you’re comparing it to a salad, I suppose not. It’s definitely a better option than some crappier food, but ciabatta bread is pretty high in carbs and there isn’t much fiber.

But, since June is Men’s Health Month, head over to this heavy bag workout for some tips on getting healthier.

Are you meant to toast ciabatta?

Fun fact: “Ciabatta” is Italian for slipper because they look similar to the footwear. It’s crusty and tough on the outside and soft on the inside, and it’s oh-so-good toasted.

What goes well with ciabatta bread?

Ciabatta is just downright delicious, and it makes an incredible sandwich bread. It goes with lunch meat, chicken, burgers, as well as dipping in oil and vinegar. If you’re looking to tweak this recipe for a parmesan-style sandwich, replace the pesto and peppers with this easy sauce recipe.

5 Things Every Man Should Own By 30 (With Some Bonus Items for Good Measure)
Ballsy Review: An Honest Look at an Edgy Brand
Tying Boots The Best Way: Anything Else and You’re Wrong
Throw An Axe: A Fun, Badass Skill for the Whole Family
6 Things To Teach Your Manly Dog: The Starting Guide
The Ultimate Backpack for Guys: The Matador Seg30 Review